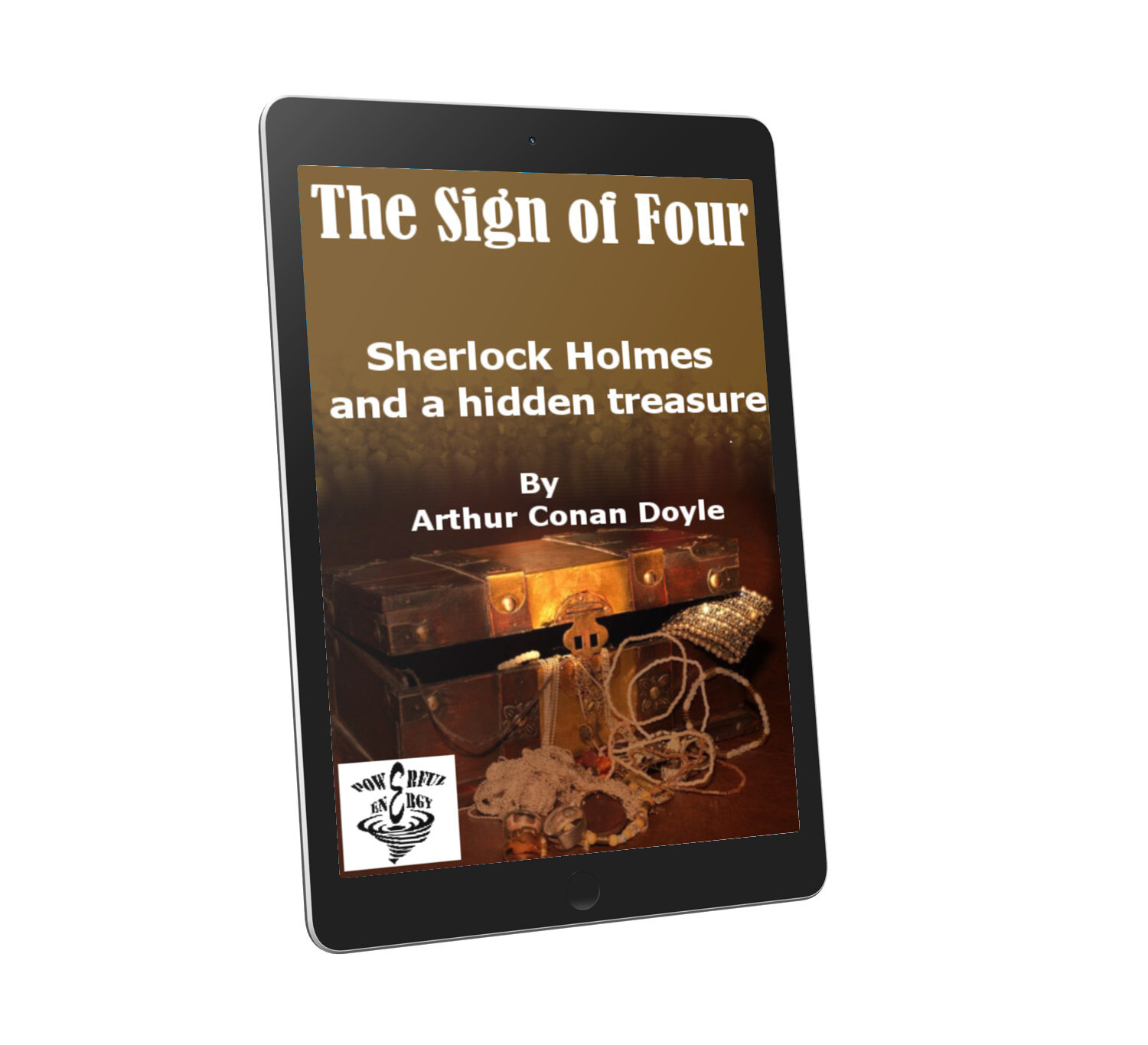 Plot summary: The story is set in 1888. The Sign of the Four has a complex plot involving service in India, the indian Rebellion of 1857, a stolen treasure and a secret pact among four convicts ("the Four" of the title) and two corrupt prison guards. It presents the detective's drug habit and humanizes him in a way that had not been done in the preceding novel, A Study in Scarlet. It also introduces Doctor Watson's future wife, Mary Morstan. According to Mary, in December 1878, her father had telegraphed her upon his safe return from India and requested her to meet him at the Langham Hotel in London. When Mary arrived at the hotel, she was told her father had gone out the previous night and not returned. Despite all efforts, no trace was ever found of him. Mary contacted her father's only friend who was in the same regiment and had since retired to England, one Major John Sholto, but he denied knowing her father had returned. The second puzzle is that she has received six pearls in the mail from an anonymous benefactor, one per year since 1882 after answering an anonymous newspaper query inquiring for her. With the last pearl she received a letter remarking that she has been wronged and asking for a meeting. Holmes takes the case and soon discovers that Major Sholto had died in 1882 and that within a short span of time Mary began to receive the pearls, implying a connection. The only clue Mary can give Holmes is a map of a fortress found in her father's desk with the names of Jonathan Small, Mahomet Singh, Abdullah Khan and Dost Akbar.

Holmes, Watson, and Mary meet Thaddeus Sholto, the son of the late Major Sholto and the anonymous sender of the pearls. Thaddeus confirms the Major had seen Mary's father the night he died; they had arranged a meeting to divide a priceless treasure Sholto had brought home from India. While quarrelling over the treasure, Captain Morstan—long in weak health—suffered a heart attack. Not wanting to bring attention to the object of the quarrel—and also worried that circumstances would suggest that he had killed Morstan in an argument, particularly since Morstan's head struck the corner of the chest as he fell—Sholto disposed of the body and hid the treasure. However, he himself suffered from poor health and an enlarged spleen (possibly due to malaria, as a quinine bottle stands by his bed). His own health became worse when he received a letter from India in early 1882. Dying, he called his two sons and confessed to Morstan's death and was about to divulge the location of the treasure when he suddenly cried, "Keep him out!" before falling back and dying. The puzzled sons glimpsed a face in the window, but the only trace was a single footstep in the dirt. On their father's body is a note reading "The Sign of the Four". Both brothers quarrelled over whether a legacy should be left to Mary Morstan, and Thaddeus left his brother Bartholomew, taking a chaplet and sending its pearls to Mary. The reason he sent the letter is that Bartholomew has found the treasure and possibly Thaddeus and Mary might confront him for a division of it.

Bartholomew is found dead in his home from a poison dart and the treasure is missing. While the police wrongly take Thaddeus in as a suspect, Holmes deduces that there are two persons involved in the murder: a one-legged man, Jonathan Small, as well as another "small" accomplice. He traces them to a boat landing where Small has hired a steam launch named the Aurora. With the help of dog Toby that he sends Watson to collect from Mr. Sherman, the Baker Street Irregulars, and his own disguise, Holmes traces the steam launch. In a police steam launch Holmes and Watson chase the Aurora and capture it, but in the process end up killing the "small" companion after he attempts to kill Holmes with a poisoned dart shot from a blow-pipe. Small tries to escape but is captured. However, the iron treasure box is empty; Small claims to have dumped the treasure over the side during the chase.

Small confesses that years before he was a soldier of the Third Buffs in India and lost his right leg in a swimming accident to a crocodile. After some time, when he was an overseer on a tea plantation, the Indian Rebellion of 1857 occurred and he was forced to flee for his life to the Agra fortress. While standing guard one night he was overpowered by two Sikh troopers, who gave him a choice of being killed or being an accomplice to waylaying a disguised servant of a Rajah who sent the servant with a valuable fortune in pearls and jewels to the British for safekeeping. The robbery and murder took place and the crime was discovered, although the jewels were not. Small got penal servitude on the Andaman Islands, after 20 years, he overheard that John Sholto had lost much money gambling and cannot even sell his commission; therefore, he will have to resign. Small saw his chance and made a deal with Sholto and Arthur Morstan: Sholto would recover the treasure and in return send a boat to pick up Small and the Sikhs. Sholto double-crossed both Morstan and Small and stole the treasure for himself-after inheriting a fortune from his uncle. Small vowed vengeance and four years later escaped the Andaman Islands with an islander named Tonga after they both killed a prison guard. It was the news of his escape that shocked Sholto into his fatal illness. Small arrived too late to hear of the treasure's location, but left the note which referred to the name of the pact between himself and his three Sikh accomplices. When Bartholomew found the treasure, Small planned to only steal it, but claims a miscommunication led Tonga to kill Bartholomew as well. Small claims the Agra treasure brought nothing but bad luck to anyone who came in touch with it—the servant who was murdered; Sholto living with fear and guilt; and now he himself is trapped in slavery for life—half his life building a breakwater in the Andaman Islands and the rest of his life digging drains in Dartmoor Prison. Mary Morstan is left without the bulk of the Agra treasure, although she will apparently receive the rest of the chaplet. John Watson falls in love with Mary and it is revealed at the end that he proposed to her and she has accepted. (Plot summary by Wikipedia)